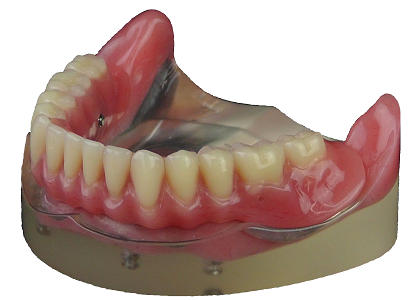 WHAT IS THE PEEK PROSTHESIS?

The PEEK prosthesis is an innovation in the dentistry. The prosthesis should make it easier for people with a denture to get through the day. A thin bar is anchored on implants in the jaw bone so that it is not resting on the gum line and there is still room for cleaning underneath.

The removable denture will be easy removable from the bar by small bolts that can easily be released with a paper clip or the key that is given to you by the dentist together with the PEEK prosthesis. This enables easy cleaning of prosthesis under the tap.

Why a PEEK prosthesis is better than conventional prostheses?

The advantage of PEEK prosthesis is that, although it is one of removable dentures, in the mouth it behaves like a firmly anchored bridge and cannot fall out. The prosthesis can only be removed by manually releasing two bolts latches. The titanium bar with its lock, which is firmly anchored in the jaw, is very thin and does not lie on the gums. This makes cleaning of the oral cavity easier and prevents contamination that can result in gums inflammation.

In addition, a further advantage of the PEEK prosthesis that being removable, makes it easy for the dentist to repair or extend it. Should the gums over the years further recede leaving gaps between the prosthesis and the jaw they can be repaired within half an hour by a dental technician.

So, the PEEK prosthesis is a good option for people with little jawbone and for everyone who takes care about proper oral hygiene of the denture. And, unlike conventional dentures, nobody has to worry that the prosthesis won’t hold! So you can carefree chew, talk and laugh again!